Having researched mobile locative technology for the past few years, I have often heard from people that they don't use such features on their smartphone that automatically ascertain and transmit their position as they are concerned about being tracked. I have never felt such a concern as I don't believe the various locations I traverse are interesting. In all likelihood, companies will may use the data to find out enough about me to try to sell things - hopefully a more geographically relevant way.

So I have always turned my location tracking settings on and given my permission for most of the apps I have downloaded onto my smartphone to access this data (with the exception of a few apps that I am unable to determine why they need this info on me).

I do believe that all users should always be given the option to turn this ability off. Here's a link to instructions on how to do this.

But since allowing myself to be tracked by my Android device's maker, Google, I have not encountered any problems (that I'm aware of anyway - who knows if some nefarious government agency or sinister hackers are compiling a dossier on me - if so it would be exceptionally boring).

And I have benefitted by a few apps knowing my location - though more often than not the location is not updated in real time to be of the utmost use.

I recently found out about an online service by Google offers, called Location History, that let's users see on a map what locations their device has transmitted back to Google. The service requires one to enter the account associated with the device and password. This service isn't new but it does seem largely unknown. It turns out, Apple and Microsoft also offer similar abilities.

When I checked out my location history that Google had, I was shocked by how frequently my location was transmitted (every few minutes) and that Google kept this data for so long (in my case dating back years -CHECK THIS!!!!).

Here's a sample of what is recorded: 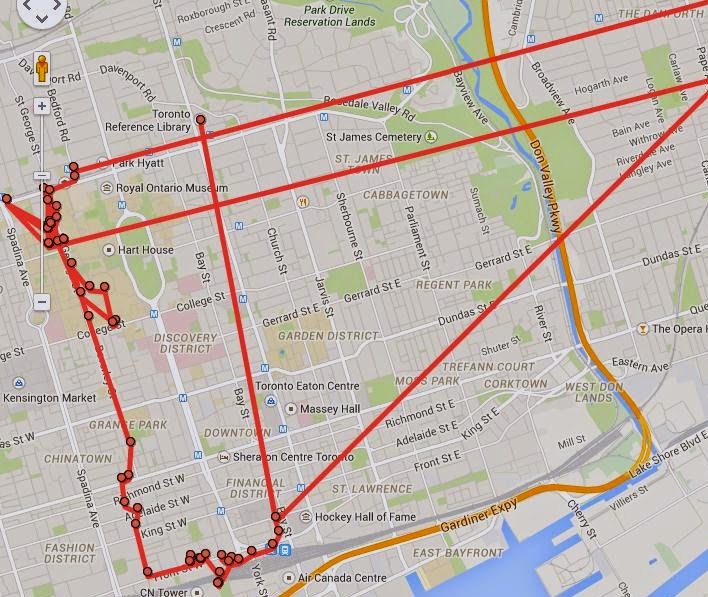 I was surprised by how granular the data is and the extent to which Google let's one view it. One can view tracking paths by the day or in aggregate time frames (e.g. past two days, past week, past month, etc.). I'm not sure how long Google stores records, but I checked mine and it goes back months.

There were some errors for places I didn't go but was near and going underground (such as a subway) caused the route lines to be wrong as it assumes a straight line between two known positions).  I've heard that such features are a battery hog, but I read that Google uses positioning by cell phone towers instead of GPS to save battery life.

Not being a privacy worrier, I was nonetheless bit creeped out by this despite how cool it is to see this so nicely and interactively presented. Google does let one delete their location history completely or item-by-item.  Still, I'm not planning on deactivating it.

I thought this feature was interesting if not particularly useful. It had occurred to me that I could use it to prove that I (or to be specific my smartphone) was at a certain point when I said it was. But it wasn't until I mentioned to my cousin that she thought of a powerful - and affordable - use for it. Her company is looking for a logistics solution for their small fleet of delivery trucks.

She describes their needs, "We are looking for an inexpensive way of tracking our fleet throughout the day without installing something on the vehicle. Our fleet have Android devices tethered to tablets turned on for the work day and in the vehicle charger while driving."

If each driver were given their own individual account for the tablet, I can't see why management couldn't use this information to track their location history at a rate significantly cheaper than logistics solutions.
Posted by Glen Farrelly

Email ThisBlogThis!Share to TwitterShare to FacebookShare to Pinterest
Labels: geolocation

Get these posts by email

For more of my research and work, check out my online portfolio

Webslinger by Glen Farrelly is licensed under a Creative Commons Attribution-NonCommercial-NoDerivs 3.0 Unported License.